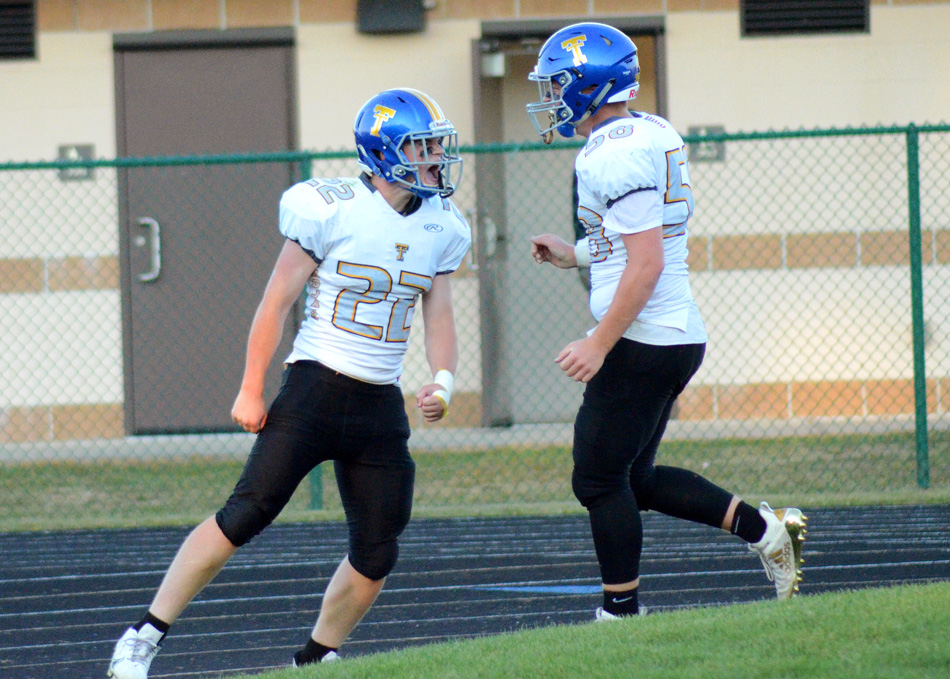 UNION MILLS – Football has become more of a privilege this season than ever before. With an ever present uncertainty of just how much football fans and players will get this season thanks to COVID-19, every game is a gift.

Younis’ squad was appreciative to take the field Friday evening, but the Trojans were anything but polite house guests. Triton racked up 299 yards rushing on its way to a 23-20 victory over South Central.

“Seeing what LaVille went through, having to cancel three games, it was an eye-opener for our kids,” Younis explained. “They really were so appreciative to be out here and just loving every minute of it and they had that energy the whole game.”

The Trojans proved to be the more energetic and physical of the two teams Friday evening at Satellite Field, but that did not mean Triton was excused from the typical mistakes that come with a season opener. What defined Triton’s effort against South Central was its ability to overcome its own mistakes in the tightly contested game.

Triton lost two fumbles and threw one interception in Friday’s game. Three turnovers would have been recipe for disaster if not for the Trojan defense. The unit forced three turnovers of its own, two interceptions and a fumble recovery, and never let South Central score after a Triton turnover. 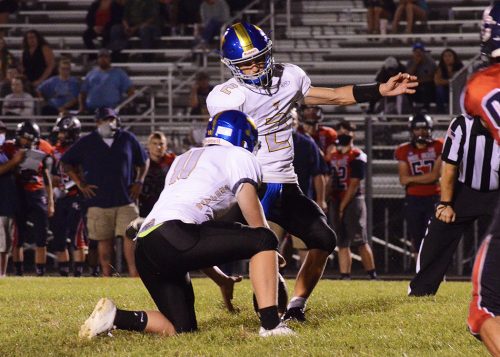 The poise of the defense was a key piece in earning the win as South Central was held to just 191 yards of total offense. The Satellites failed to get mush push against Triton’s defensive front and that control in the trenches was what led the Trojans to rack up nearly 300 yards on the ground.

“I was really proud of our line,” Younis said. “They’ve worked really hard in the short amount of time we’ve had to practice. We’ve had to move some kids around, Tyler Amsden is 155 pounds and playing guard for us, but he is doing an awesome job.”

Amsden and the rest of the big uglies up front were able to provide good running lanes throughout much of the game. Hunter McIntyre led Triton with 106 yards on the ground. Anthony Schuh was not far behind with 93 yards of his own, including a 35-yard scamper in the second quarter.

Schuh’s score put the Trojans up 13-0 with 10:08 to play in the first half. The Satellites got on the board in the closing seconds of the half as Brady Glisic connected with Brendan Carr for a 14-yard score.

Glisic found Jacob Oehmen midway through the third for short touchdown completiong to put the home team up 14-13. Triton responded on the next drive as Trace Schuh abused the Satellite defense on his way for a very physical, 8-yard score to put Triton back on top 20-14.

A missed extra point on Triton’s first score of the evening loomed large as the Trojans found themselves clinging to that six-point lead late in the fourth quarter. Starting quarterback and kicker Cole Shively, a freshman, had taken his lumps in the opening quarter. Shively had his first pass picked off on the team’s opening drive. The freshman signal caller bounced back and threw a 22-yards strike to Lucas Cabrera for the game’s first score and then promptly missed his first extra point attempt.

But, just as the team had overcome its errors throughout the night, Shively did not let his mistakes define his performance.

The freshman nailed his next two point-after attempts and hit what proved to be the game-winning field goal from 30 yards out.

“He wanted it,” Younis said when asked about Shively’s kick. “He came over and said, ‘Let’s kick the field goal.’ And I agreed with him because I knew he could do it.

“For him to come out here and do that, it will set the tone for him the rest of the season.”

Shively’s clutch kick put Triton up 23-14 with 1:03 to play. Glisic hit Tyler Hudspeth for a 69-yard score to give the Satellites a fighting chance but Triton recovered the ensuing onside kick to secure the victory.

Triton (1-0) potentially will have to wait two weeks before taking the field again as its game with LaVille has been cancelled. The Trojans will travel to Caston (1-0) on September 4. South Central (0-1) travels to Culver (0-1) next week.

How to Install and Configure Linux Malware Detect (LMD) on Linux

You may ask, can Linux get attacked by malware? The answer is always yes. Though most of the malware is created for windows, it is possible that your Linux computer ...